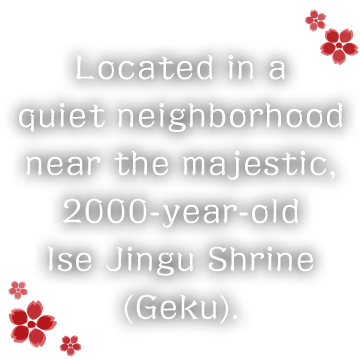 Koukou unagi
Fumisaburo Okuda was born in 1835 in Yamada Town (present-day Ise City) just a few years before both of his parents died. After he was orphaned, he was then taken in and raised by a neighboring family. Fumisaburo’s foster family worked as plasterers, and when he was old enough, he changed his name to Yokichi and began working to help his new family’s business. But the family business slowed due to his foster father’s illness, so Yokichi started selling grilled eels to help provide for his family.

Every day, no matter the weather or his condition, Yokichi kept working around Yamada town to sell his grilled eels. And after long days of work, he spent his nights preparing eels for the next day. He worked very hard and found great joy in relaying the stories he heard on the streets of Yamada to his foster parents and also sharing his experiences with them. Yokichi called his eel business, “koukou unagi” or filial piety eels, a term used to convey respect for his parents, elders, and ancestors. Later in his life, his hard work, dedication, and delicious eels were recognized and honored by the local Yamada government which made his grilled eel business even more popular and famous in the area.

In 1888, at the age of 54, Yokichi died. Soon after, in 1893, his son, Fumikichi, took over his father’s business and methods and reopened the grilled eel business. Later, Fumikichi expanded his business and opened a Japanese style cuisine hotel called Okubunrou.